One of the oddities of Parkinson’s Disease is that it messes with one’s sense of smell. Yes, it’s less of an offense to one’s way of life than tremors or some of the other more odious issues, yet it’s still an often-inconvenient loss. For example, gas companies put a noxious odor in the gas that is piped into your house so you can tell if there is a leak. That’s a great strategy if your sense of smell is in working order! With Parkinson’s, however, no so much…

Recently my elderly dog has had incontinence problems…always, it seems, as she is resting on the carpet in my sewing room. I realized one day that without a sense of smell, that room and everything in it could reek and I would never know. Solution: begin carpet removal. Then borrow a good friend’s nose to be certain the “treatment” was effective. (*sigh*)

Sometimes, I go for days without smelling anything, and don’t really miss it…until I realize that I cannot taste some of my favorite foods. How, I ask you, is a cook supposed to check to be certain seasonings are just right if said cook cannot taste!?!? And, how can I tell if something in the oven is done? I’ve always been able to tell when something is just done by how it smells. Can I blame burned or under-cooked things on Parky……Of course I can! 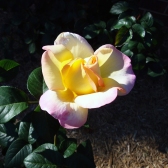 All of these things really are mild inconveniences when compared to other Parkinson’s issues. But there is one place where I miss this sense the most. The best way to explain is to tell the story: Years ago, my husband decided to give me roses, knowing I love this flower. Rather than the cut variety, he brought me a dormant rose bush. In time, that bush produced dozens of gorgeous pink roses, one of which even made the head table in a rose competition. Needless to say, I was hooked.   Thirty some tea rose bushes later, my rose garden produced the heady perfume of a myriad of roses, all chosen for their fragrance.

Sometime before I discovered the connection between Parkinson’s and the loss of sense of smell, I realized that my roses no longer smelled good. 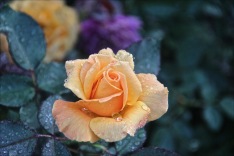 In fact, they had no scent at all, no matter how carefully they were watered and pruned and fertilized. Of course, they really did still have their marvelous scent, but it was lost to me early in the Parkinson’s journey. Sadly, the upkeep on my rose garden soon became too much for me to handle and the “scent motivation” was no longer there. So, like many other things in my life, that garden was dismantled…

I do have some gorgeous pictures from the rose garden, and some wonderful memories of sharing huge bouquets of roses to students, parents, and friends who needed some TLC. And of course, there were those crazy days when my Dad and my sister and I transplanted the entire 30+ shrubs to new homes. When we sold our 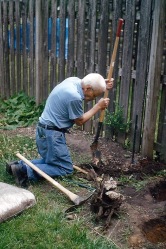 Virginia house and moved to North Carolina, Dad and I dug up those shrubs, ignored their thorns, dumped them in buckets, and then drove30 miles south to dig more holes, replant the bushes, water and mulch the new bed. The project was completed as we enjoyed a cup of coffee on the back porch, surveying the fruits of our labors. One of those “fruits” has become a favorite picture: I found Dad very early on the morning of his 85th birthday, outside on his hands and knees in the new rose bed, digging yet another hole.

Rose Garden memories abound: when we moved to our home in the country, my sister, Marie, was present to help move the garden. Again, there were buckets and shovels, hoses and rakes, thorny bushes and a truckload of mulch, but there was more. The weather played games with us all day, cycling from snow to intense sunshine and heat to rain, and back again to snow, then heat. We laughed and sweated and made a wonderful memory as we fought the ever-present red clay and a monstrous tiller.

That rose garden has now been reduced to only five of my favorite rose bushes. I am building a perennial bed there with a myriad of shrubs – paying attentions to things like texture, color and relative height. Its effectiveness is based on visual aspects – not the sense of smell! (Who would have believed that planning a garden is a work of art!)?

As I wrap this journal entry, I have one final query: Why is it, I ask you, that I can always smell the skunk that has been hit on the road?! Seems sort of cruel somehow! Or an ironic twist. Or something…