It’s been a week since the sibling part of the Rodgers Odyssey came to its conclusion. Our family and friends gathered household goods and made plans for three months. Three of us drove a well-loaded, rented moving van more than 700 miles (through the fiery smoke of yet another disaster in the making) to our brother’s flood-devastated home in Denham Springs. Three of us flew back to Tennessee from a whirlwind visit to Louisiana, exhausted, but filled with a deep satisfaction knowing that we had made a difference.

This truck is longer than the driveway…

The crisis in Central Louisiana, caused by unprecedented flooding in August, is staggering. Thousands upon thousands of homes are still not fit for habitation, with walls torn apart, drying out as they wait for builders and building supplies. Many residents will never be able to go home, for lack of funding and other resources. As a carpenter, our oldest brother is way ahead of most homeowners. He spent his first night in 3 months at home on Saturday, after a crazy day of unloading a 26’ truck, moving furniture, rearranging furniture, installing 3 major appliances, scrubbing layers of marsh scum from the bathroom, and shopping for bedding to use on the new mattresses (which arrived only 15 minutes after we did…) Even with all the craziness of putting his household back together in less than 48 hours, our oldest brother is one of the lucky ones.

And so, tonight I am trying to fix in my memory the feelings from a family crisis, turned into a journey that is better described as an odyssey. For once, it seems, we managed to set aside our differences, working determinedly toward a common goal. The entire project was much bigger than any one of us could have managed alone. In fact, if even one family member had not used his/her resources, the outcome would have been very different; there might not even have been an odyssey at all! If even one friend had not flagged us down to offer more furniture … well, you get my drift!

THe next younger generation showed us much mercy… 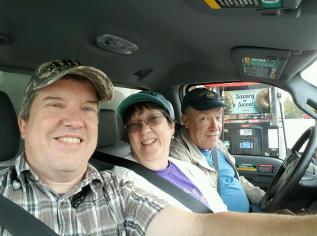 I cherish the time we spent planning, for it meant lots of extra conversations with all of my siblings. Sometimes, we get so busy with our own lives, that weeks (okay, sometimes it’s months] go by without so much as a brief phone call. I hold close in my memory the determination and sacrifices I saw from family members. I experienced again my siblings’ tremendous strength and brilliant creativity that were only beginning to blossom when we lived under the same roof as children. There is delight over the family stories we shared, especially during the long hours crammed into the front seat of the cab. Laughing until tears rolled down our cheeks, punchy with exhaustion. Restlessly trying to sleep during the long night in the motel, anticipation building with the coming daylight and our impending arrival in Denham Springs.

Lest you think the Rodgers Clan is always so wonderfully harmonious, let me tell you a bit more about who we are. We often muse over the fact that among the six siblings, there are six different blood types, from O negative to AB positive. We have the genetics for every type possible! That same diversity mimics our views about religion and politics as well! I’ve often wondered how six such very different people could have come from the same parents. We were raised in the same neighborhood, to which my parents moved in 1949. We even attended the same church and schools for the entirety of our childhoods and adolescent years. Yet, we have vastly different ideas about how this thing called “Living” should be done…

The juxtaposition of this family event with the seasons of tumultuous national elections and also the Thanksgiving holidays gives me pause. It feels as if our nation is being shaken to its very core as we face serious questions about who we are, what we believe, and how we present ourselves to our global neighbors.

Less than 48 hours before I left home for Louisiana, our nation elected perhaps the most controversial character who has ever entered the White House. Many of us fear for the hard-won freedoms we have enjoyed as Americans. Many of us fear the loss of decency, of decorum, of tolerance, of justice. At the same time, we are frustrated and disgusted with the decadence, the blind eyes and unhearing ears of politicians, addicted to power, attentive only to what is best for themselves. It feels as if we are sailing into dangerous, unknown waters, “Category 5,” without so much as a life preserver!

Perhaps the ship’s stability, the solution to the crises, rests within the hands of each of us citizens. Perhaps, if we would take the time to communicate better, really see and hear those around us, step up to share whatever resources we have, give a bit more space to our neighbors … perhaps then we would find ourselves living again within the Great Society. The greatness of any group of people rests within the individual members of the group who know how to LOVE actively, sacrificially, unselfishly, always seeking the best for and expecting the best from those around them

The United States’ Odyssey is far larger than the Rodgers Sibling Journey, yet the principles for success are the same. Simple, really. Much like all those things we learned in kindergarten … Not the least of which is “Hold hands when you cross the street.” (Reference: Robert Fulghum, Everything I Need to Know I Learned in Kindergarten, 1986)